Great tips and pointers for getting some relief of your varicose veins!

In our body there is a huge network of veins, which carry blood from one part of the body to the other part. When some injury happens to even a single vein, the blood flow gets affected. This can further lead to several diseases. Many times the veins get congested due to the blood clots and this can also result in various illnesses.

Due to the injury the veins appear bluish and swollen. This condition is known as varicose veins. This is extremely painful condition but you can get some relief from the pain by trying the various home remedies for varicose veins.

1. In order to keep the blood circulation well within your body, exercising is the only option. Walking, jogging, cycling and swimming are some of the best form of exercising. Even if you perform some sort of exercising for about 30 to 45 minutes a day that will be sufficient to keep your body healthy and fit.
2. Follow healthy eating habits and stay away form junk food, oily food. Limit your intake of sugar and salt. Try to minimize eating ice creams, cheese, tobacco and peanuts.
3. Your diet should consist of vegetables, fruits, seeds, nuts, whole grains, fish and Soya products. Onion, ginger and garlic are also effective for proper blood circulation in the body. Include them while cooking food.
4. Pineapple is also very effective in the treatment of varicose veins. Pineapple juice should be consumed once a day in case you get varicose veins often.
5. Blackberries and cherries are also effective in preventing varicose veins from occurring.
6. Eat fibrous food, as this will keep the bowels clean. This will prevent varicose veins from occurring and will also keep you away from various other conditions.
7. To keep the blood circulation proper avoid sitting or standing in one position for long time. Take break for five minutes in case your work wants you to sit in one position for too long. This will ensure that all the body parts get proper blood supply. Thus there will no pressure on the veins. This is one of the very effective home remedies for varicose veins.
8. Don’t wear tight clothes. Your body should feel comfortable in what you are wearing.
9. In case you have to stand for long time while working then balance your weight equally on both the legs. Don’t put extra pressure on one leg.
10. Rest is also important part of the day. Take rest whenever possible. Daily sleep of six to seven hours is a must for all of us.
11. Applying castor oil over the swollen veins will reduce the swelling and heal the varicose veins fast.
12. Mix carrot juice and spinach juice and drink it. This will also give relief form varicose veins.
13. Massage the swollen veins with rosemary oil, as this will give relief from the pain.
14. Applying apple cider vinegar over the veins will also give relief from varicose veins.
/www.facebook.com
Posted by cecilia-allthingsbeautiful.blogspot.com at 3:33 AM No comments:

1 Miracle Prayer Shocks Everyone...And It Was Given By An ATHEIST!

Clay Lein was an atheist and he let everyone know when he had the chance. You see, he studied engineering in school and needed proof to believe ANYTHING. This thought process served him well in business but where did that leave Clay when it came to God?
Clay was raised attending Vacation Bible School as a child but as he grew older, he began to lose his need and his faith in God. “I had a very rational mind. It had to be logical. I needed proof. There had to be evidence. And if there wasn’t proof then it was just something people made up,” Lein siad. “Part of the training for engineers is to be skeptical, to demand data, to want to see evidence.”

Clay got married, earned an MBA and began a successful career at Intel. All of these achievements and the world that surrounded him seemed very concrete and observable. There was no need to believe in something intangible that required you to suspend your scientific mind, he reasoned.

"Why would I need God? I mean, if he even existed why would I have any need for him, he thought."

But his wife pleaded with him to attend church, and he acquiesced because he thought “church was a place nice people go.” All the while he tactfully but firmly let people know he was an atheist.

Then he volunteered at a youth camp and that’s when his skepticism got shattered.

He was asked to pray publicly.

Clay was put on the spot without any preparation and he got nervous. But he quickly figured he could keep up appearances by drawing on his childhood memories from Vacation Bible School. He quickly convinced himself he could fake his way through.

But as he began to pray, something very unusual happened. Words oddly began to flow naturally from his mouth, without him needing to conjure up any memories whatsoever.

The Holy Spirit took over and directed his prayer for each child! By the time he was done, a simple prayer had extended to 15 minutes. And it hit the mark.

One girl was so deeply moved that she began crying.

“In between the sobs she begins to share that her uncle was abusing her,” he recalls. “And that she hadn’t been able to tell anybody else until that moment. That’s when I think something clicked for me.”

Suddenly, “God was relevant and He really wanted to do amazing things in my life,” Clay said. “I became a Christian that day. And I heard a voice, and it wasn’t Charleton Heston, it was more a thought that comes up and often times it sounds like Clay’s voice but it was definitely God. And it said, ‘Try me.'”

This experience didn’t fit into a neat scientific box, measurable by instrumentation or by the five senses. But it was evidence nevertheless that completely upended his skepticism.

Clay began thinking about how God had changed that teenager’s life in just 15 minutes. What would happen if he gave God more than 15 minutes?

“A question I had for God: if you can do that with my life, if I get out of my way for just 15 minutes, what could You do with my whole life if I got out of Your way with all of it?” he recalls. 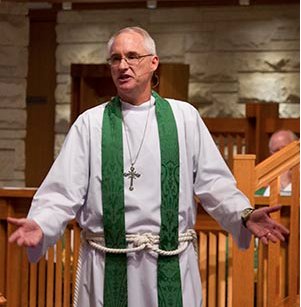 Clay launched into a new path for his life. He enrolled in seminary and was ordained an Episcopalian minister in 1996.

He served as a deacon in South Carolina and as the rector at a church in Plano, Texas. In 2002, he helped start a new congregation in Frisco, north of Dallas, and it now has 1,400 members. Most recently, he was named rector of the 4,000-member Church of St. John the Divine in Houston.

The display sign outside the church declares: “Changing lives for God in Christ.”

“I’m a poster child” for that declaration, he says. “If God can change me, He can change anybody.”

Wow! Thanks you, Clay for your amazing story.  Our God is a God of second chances and he never gives up on us! God had great plans for clay and he does for you too!  Give God 15 minutes today and see what he does for you.  It's never too late to have a change of heart!
http://www.godvine.com/
Posted by cecilia-allthingsbeautiful.blogspot.com at 2:51 AM No comments: