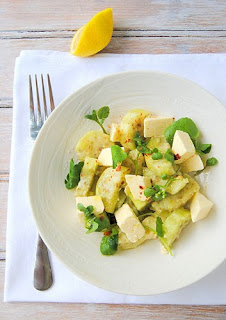 Serves 6 as a starter

First peel the cold pears. Cut about 5 mm off the top and bottom of each pear, using a kitchen cloth or a rubber glove to grasp the pear while you do so. Place a pear, upright, on a chopping board. Push the tines of a fork into the top of the pear to hold it fast. Now, using the tip of a sharp paring knife, make four vertical cuts, about 3mm deep, into the skin of the pear, scoring from top to bottom. Use the fork to peel away the skin in sections; it will come away easily if the pears are ripe. Cut the pear in half vertically and slice into thick half-moons. Repeat with the remaining pears.
Put the pears in a bowl and add the feta, watercress and chilli flakes. Season with salt and pepper (but go easy on the salt, as the feta is already quite salty). Toss all the ingredients gently together. Pile the mixture onto a platter (or onto individual plates) and drizzle with a little olive oil and a generous spritz of lemon juice. Serve immediately.
This recipe was originally published on Scrumptious SA.

Posted by cecilia-allthingsbeautiful.blogspot.com at 8:03 AM No comments: Links to this post

The ant, the elephant and a tree that whistles

Here’s a little tale about ants, elephants and a tree that whistles which has rather large implications.

The tree is Acacia drepanolobium, commonly known as a whistling thorn for reasons which will become clear in a moment. It’s native to East Africa, grows to around six metres tall and has the usual pairs of mean-looking thorns on its branches.

Ordinarily, thorns don’t deter elephants. They can turn woodland into grass savanna in remarkably short time and have the ecological delicacy of bulldozers. But they mostly avoid the whistling thorns like poison chalices.

The reason is that these trees have bulbous spheres at the base of their thorns and dispense sugary nectar from the ends of their leaves. The result is food and housing for several species of stinging ant with Latin names far longer than themselves.

Some of these bore holes in the spheres, chuck out the contents and settle in. When the wind blows across the entrances, the spheres whistle like flutes. If an unwary animal attempts to browse off a whistling thorn, the ants attack with singular ferocity.

There’s an inverse proportion between an elephant’s size and strength and the sensitivity of the inside of its trunk. Once bitten, as they say, twice shy. The same browsing sensitivity goes for giraffes and other herbivores.

To test whether the ants were deterring elephants, University of Florida biologist Todd Palmer and University of Wyoming ecologist Jacob Goheen fed some young orphaned Kenyan elephants branches from whistling thorn trees, as well as from another acacia. When there were no ants on the branches, the elephants were just as likely to eat whistling thorn as they were their usual tree food. But when the branches held ants, the elephants avoided both types of acacia.

The mutualistic relationship, however, is more complex than just housing ants. If the whistling thorn could be said to have a preference, it would be for the Crematogaster nigriceps ant. And if the nigriceps could be said to have a plan, it would (and does) allow occasional herbivore browsing. This is because a bit of plucking stimulates leaf growth, which increases the supply of nectar.

However, if one of the other acacia ant species such as C. sjostedti takes over a tree, the insects’ preference isn’t for the bulbs but holes drilled by stem-boring long-horned beetles. In ways not yet understood, this ant species attracts the beetles, which eventually weaken a tree and can kill it. To prevent this, if a tree leans out too far in the direction of another, the nigriceps prune the twigs so there’s no contact, avoiding a possible invasion.

Too greater variation in the balance between tree, ant and elephant would cause hardship for all three.
There’s no need to remind you that, while an elephant’s brain is larger than ours, a tree doesn’t have one and an ant’s is smaller than the point of a pin. We’re talking about something other than intelligence here and a synecdoche of a story about deep time.

Every second of every minute of every hour of every day, year, decade, millennium, million and even billions of years, the relationship between every insect, animal, bird, fish, plant, mountain, continent, planet, star and galaxy is in an exquisite ongoing dance of this and every moment of time.

Life on our blue planet is a never-ending story so big, so small, so destructive and constructive, so beautiful and profound that, like the blind men trying to describe an elephant by touching parts of it, we can hardly see it at all.

And the hardest of all is to understand the outrageously vast time it takes for an ant, a tree and an elephant to learn to dance together in mutual harmony on the African savanna.

Posted by cecilia-allthingsbeautiful.blogspot.com at 7:57 AM No comments: Links to this post 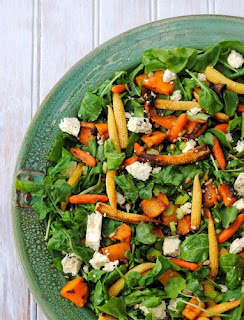 Heat the oven to 190ºC. Put the butternut cubes on a roasting tray and drizzle them with half the olive oil. Season generously with salt and black pepper and, using your hands, toss well to coat. Roast the butternut, uncovered, for 25-30 minutes, or until the edges are nicely freckled with brown. Push the cubes to one side of the tray and arrange the baby sweetcorn and carrots on the other side. Drizzle the remaining oil over them, season, toss well and return the tray to the oven. After 15 minutes, remove the butternut cubes, place them in a large bowl and cover with clingfilm. Leave the sweetcorn and carrots in the oven for another 15 minutes, or until they are toasty and just tender. Add them to the cooked butternut cubes and set aside at room temperature until you’re ready to use them.
To make the dressing, tip any juices that have accumulated under the roast vegetables into a small mixing bowl. Add the mustard powder, caster sugar, lemon juice, soy sauce and vinegar and stir until the sugar has dissolved. Now whisk in the olive oil to make a smooth emulsion. Season with salt and pepper. If you’d like a tangier dressing, add more lemon juice or vinegar to taste.
Put the sunflower seeds in a large frying pan and toss them gently over a medium-low flame until lightly toasted. Turn the heat up to medium, add the soy sauce and stir well so all the seeds are coated. Leave over the heat for 30 seconds, or until the pan is dry, then set aside to cool slightly.
Lay the leaves on a big serving platter and arrange the roast vegetables, chopped celery and feta – broken into chunks – on top. Immediately before you serve the salad, pour over just enough dressing to coat the leaves lightly, and sprinkle with sunflower seeds.

This recipe was originally published on Scrumptious SA.

Posted by cecilia-allthingsbeautiful.blogspot.com at 7:48 AM No comments: Links to this post